I’m Having a Blast

I’m spending a lot of time figuring out where the old HEPL building was. And I’m looking at pictures of the campus and trying to relate them to maps. At this point it’s about detective work and visualization, not old memories.

This picture gave me an “Uh, duh!” moment. 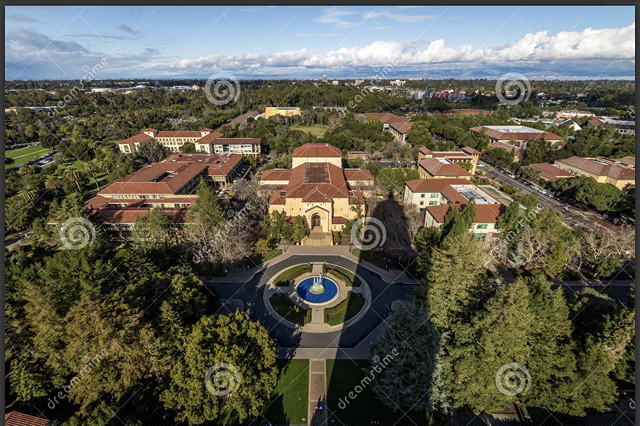 For a while I couldn’t for the life of me figure out what this picture was looking at. Where was Hoover tower? How can you have a picture of the campus without that thing commanding your attention? It’s the best way of locating the campus from the air. 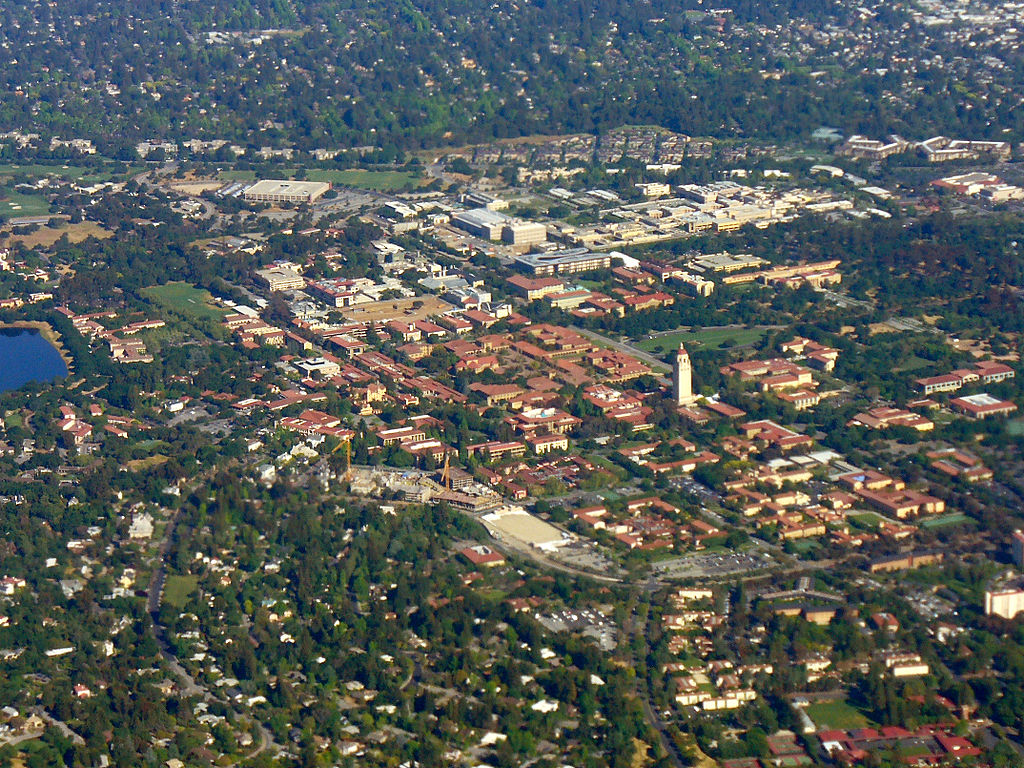 So what is that long shadow in the first picture? Duh. The picture was taken from the top of the tower of course.

I may not be very bright, but I’m having a great time.

Posted in Life As a Shared Adventure | 6 Comments

The HEPL building, 58 years old, a Stanford baby boomer born in 1949 in the aftermath of World War II, a child prodigy that produced the world’s first full-scale linear accelerator when only a year old and won the Nobel Prize for physics at age 12, has passed on. Despite a certain gangly appearance, it was loved by its extended family of researchers for its utilitarian qualities. There were several causes for its passing (old and in the way, in essence), but the final blow was delivered by heavy-duty construction equipment.
—Stanford News, January 30, 2008

After 58 years on the frontiers of science, the HEPL building meets the bulldozer, making way for the next generation of research.

That obituary warms my heart.

Why would I care that a nondescript building was honored in its passing? Romance, of course. That’s where I met Andy a little over 60 years ago. I was a summer student after I graduated and he was working on his Ph.D. thesis. When I first saw him he was immersed in building the electronics for it, and he had a sign like this over his lab bench to remind him which way was up:

What could be more romantic than that?

So why was I searching the internet to find out what happened to the lab? We couldn’t find it on the map of the campus with all the new building since we were there, and I wondered what happened to it. Why think of it now? Because now Kaitlin is living a few minutes north and working a few minutes south of the campus. It’s bringing back old memories. I wouldn’t like to go back to those days, but I’m so glad I had them.

Posted in Life As a Shared Adventure | 19 Comments 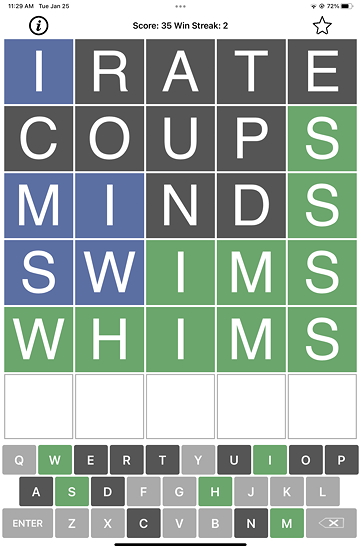 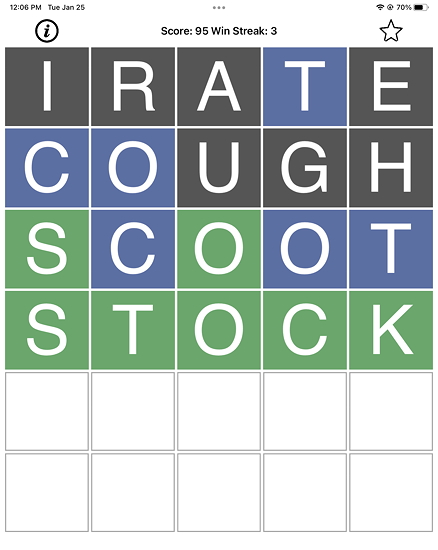 Note to self, don’t play PuzzWord in the evenings. Sunday night I kept dreaming about putting five-letter words into boxes.

I’m not sure last night was that much better, I dreamed about using the weight machines at the Y, even though I have’t gone there for almost two years.

At least it’s a lot better than nightmares!

Posted in Life As a Shared Adventure | 25 Comments

Mostly our town has had a lower COVID case rate than the rest of New Mexico, but suddenly it has shot up. I’m double masking when I go to the store, and we had to decide whether to keep Andy’s dentist appointment for tomorrow and my eye exam for Thursday. We decided since Andy’s appointment was just for a cleaning he should cancel that and make a new appointment after things settle down. I’m keeping my eye appointment because tomorrow was the first day they had when I tried to schedule my annual exam for last September. They seem to be careful about COVID and I’ll double mask.

I’ve been following the New Mexico site for information about our county, but they’ve been behind the past few days. So I went searching and found this New York Times site: Track Coronavirus Cases in Places Important to You. Good for the internet and the New York Times! 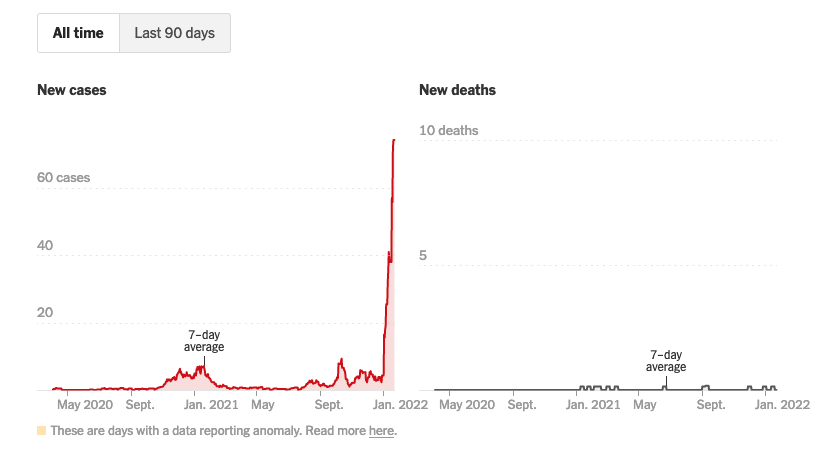 Posted in Life As a Shared Adventure | 20 Comments

People tend to gain in tolerance and grow more generous-spirited as they get older, but on the other hand, we often lose connectedness and some degree of interest in what’s going on, so our generosity is not that expensive to us.
__Edward Hoagland

First of all, I know a lot of people who become even less tolerant as they get older.

I’m making more effort than I used to try to understand people who have different views than I do. I’m getting more curious. I’ve always been interested in history, and the world is going through momentous changes. I want to be aware of what’s going on, so I’m subscribing to a lot of digital newspapers from different regions and with different interests.

I suppose the quote is right in one sense. I’m purposely less emotionally involved because I don’t like a lot of the changes and want to focus on understanding rather than reacting. It’s part of Mary Oliver’s quote, keeping some distance between myself and people who think they have all the answers.

Posted in Life As a Shared Adventure | 20 Comments

The Variety of Human Beings

One tree is like another tree, but not too much. One tulip is like the next tulip, but not altogether. More or less like people—a general outline, then the stunning individual strokes.
—Mary Oliver

Yes, people can be quite different. One reason I like biographies and certain TV programs is they let us understand people completely different from us. (Good literature works too but I seldom read fiction.). The unlikely program I’m watching now is The Dallas Cowboys Cheerleaders: Making the Team.

I’ve seldom worn makeup, have no interest in glamour, etc., but I’m gobsmacked by the gals who try out and do it. It’s extremely hard work, and if they make the team they’re not only expected to be fully committed to the organization, they’re also required to either have full time jobs, be students, or be at home mothers. That has been a real eye-opener and I’m thrilled that one of my stereotypes has been shattered.

Posted in Life As a Shared Adventure | 14 Comments

Ah! There is nothing like staying home for real comfort.
––Jane Austen

In these COVID times I’m not sure everyone would agree with Austen, but Andy and I haven’t been affected much by the restrictions. We’re happy with our quiet life.

I do have to add, though, our trip to Massachusetts to visit Kaitlin, Torben, and the pups was one of the highlights of my life. We’re grateful the booster shots came along at the right time so we could chance the air travel.

Posted in Life As a Shared Adventure | 22 Comments

Let me keep my distance, always, from those who think they have the answers.
—Mary Oliver

Or maybe listen but don’t let them insist that you agree with them.

Posted in Life As a Shared Adventure | 14 Comments

The majority of people feel they must be doing something all the time. Many who sit all day in an office or clean the house or work in a factory think that if they sit down at a sidewalk cafe and fold their arms and look at people, they are merely wasting time. They are wrong. In watching people and enjoying life, they may only then be truly alive.
—Artur Rubinstein

Do you feel you are frittering your life away if you’re not being productive? What do you do for fun? When do you feel truly alive?

(Full disclosure. This post is quick because I spent a good part of the day playing a word game. I don’t feel the time was wasted.)

Posted in Life As a Shared Adventure | 26 Comments 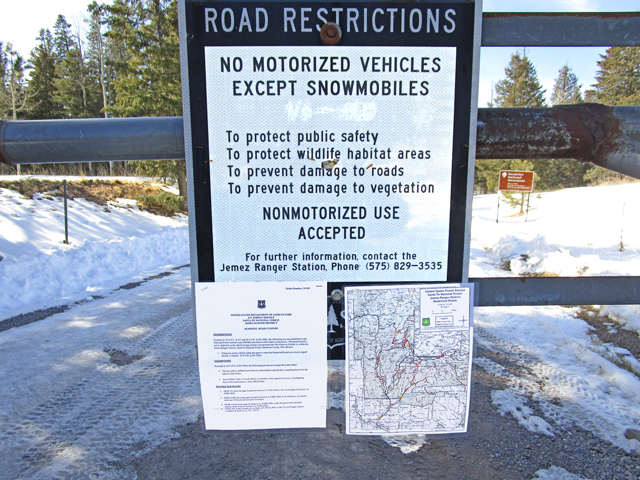 The Forest service usually closes the roads we drive on for a few months in winter, so the top sign isn’t unusual. (We have a key.) When they posted it last week they added the notice and the map showing which roads are affected.

The notice says the only exceptions are officials performing their official duties and anyone with written authorization from the Forest Service. So Andy phoned the local office last Friday to see about the authorization and the secretary didn’t know anything about it. When he phoned again this morning no one answered.

We’re not concerned. We photocopied our latest property tax receipt and Andy will take it with him…also most of the rangers up there know him. Again, we’re not concerned, but it is interesting. We’re cutting everyone a lot of slack in these COVID times.

Posted in Life As a Shared Adventure | 12 Comments